My titanium clips are three years old today.
Or, it was 18 January 2008 is when my skull was opened.
Let us celebrate by revisiting some images from that time.
Please follow the links to maximize enlightenment. 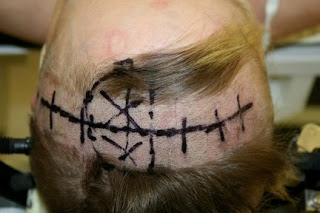 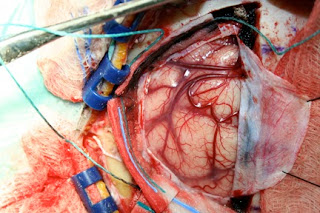 "The craniotomy was performed using the Midas Rex with the B1 attachment."
The offending sausage measuring 5.2 x 3.1 x 3.2 cm was then cut out piecemeal. 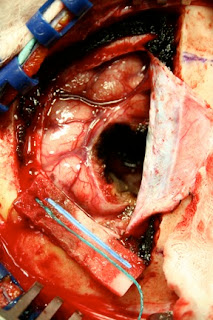 "The wound was copiously irrigated and closure was undertaken. The dura was approximated with interrupted 4-0 Nurolon suture. The dura was covered with Gelfoam and bone flaps were returned to its normal orientation and secured with Bioplate plates. The scalp flap was returned to the its normal orientation and closed using 3-0 Vicryl for the galea, and staples for the skin edges." 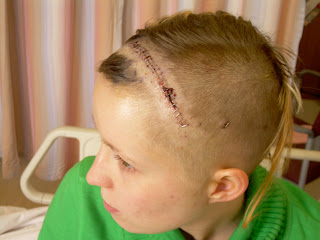 33 staples: 32 across the length of the incision, plus one seemingly random one on the side of my head, which was punched in either because the operating team thought it would be funny, or because there may have been a little too much pressure from the pins of the “headrests” used during the surgery.
For weeks after I smeared my hair with Vaseline to keep it well out of the way of the zipper that had been bestowed upon me. I ate a lot of dexamethasone and ate food and food and grew and grew into something as ferocious and hurtful as the thing they had removed. The steroids, in hindsight, may have been the worst part of the whole affair.

Sleep didn't happen, even when I was sleeping. I watched a lot of sunrises, which in the middle of winter on the prairies are some of the most sickeningly beautiful phenomena I have ever seen. Things that happen in the sky are terrifying and squeeze the lungs, and when light is moving or the Aurora Borealis flickers or all the blackness nearly disappears because there are so many stars you feel tiny and disgusting and enormous and made of glitter.
Lying on my back with my hands on my stomach I would feel those hands swell larger than my torso, fingertips grazing my neck. It's something I used to feel when I was very small and trying to fall asleep. My father said he remembered having the same sensations when he was a little boy. It's the actual sensation of growth, of the brain - which has no nerve endings and can't feel itself - developing and sending messages along the wires to the rest of the body. As my brain reclaimed the space the tumour previously occupied, I could feel its expansion in my limbs: reflection and refraction, cerebral smoke and mirrors. 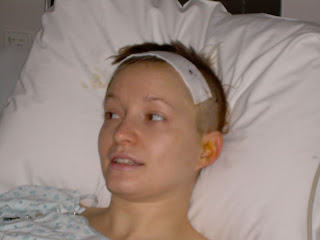 This was all at home, long after being in hospital.
When I first woke from surgery I was still dreaming. Or on morphine, in other words. It was dark outside with blinky lights. I found my legs in the grip of a species of airbag not unlike those found in motor vehicles, artificial leglungs to aid the circulation in my lower limbs that, a couple days later were coerced into walking again with significant difficulty.

I was brilliant company at this time though, entertaining visitors by falling asleep in the middle of their sentences. A friend made the mistake (sorry I haven't given it back, D) of bringing me Nina Nastasia's On Leaving to listen to, which contains a song with my name [Jim's Room]. My name is never in songs. Too strange. I was on fifty million clouds and the song asked me if I was there, and I probably would have wet the bed, except I was fitted with a catheter and couldn't even feel it when fluids left my bladder. 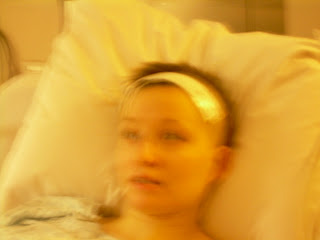 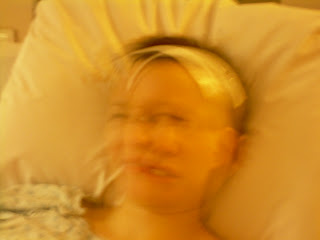 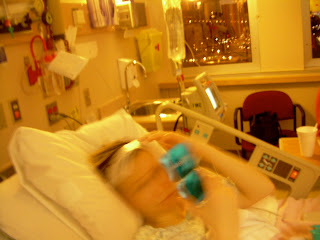 Now how to celebrate. Perhaps I'll have a sausage.
Posted by Frances Kruk at 00:05