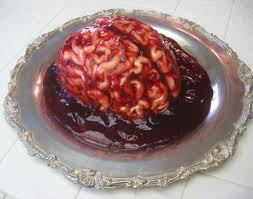 Two weeks ago, the holy month of October began once more, meaning that the time for Halloween is near and that the knives must be drawn for the carving of pumpkins and heads. October is Brain Tumour Awareness month in Canada and my awareness has been astute to the point that I haven’t felt like sitting down and writing about it all to the ether. The only thing that seems to be going on is Info Days, but it costs money and I don’t really feel like Info-ing myself about myself around plates of bad sandwiches and lukewarm cups of coffee.

See, I had my own info day last month when my MRI showed that the bubblegum dustbunny has been cultivating itself again, albeit only by a miniscule amount and without any increase in aggressiveness. Growing, more or less, according to plan. It is consistent, displaying extraordinary obedience and an enviable sense of decorum, precisely the sort of goody-goody that is bound to rebel in the most hideous way as soon as puberty sets in and the glories of sex, drugs, and rock n roll descend upon it. It can’t be killed, of course – it will always grow back, a perpetual zombie. But it can be somewhat sterilized, so to speak, mutilated before it reaches the age of reproduction and goes out and gets itself knocked up and squeezes out further versions of itself, polluting our planet with inferior beings. My inner eugenicist leapt out as I made the decision to subject the thing to a second surgery in several months’ time. Sure, I could keep watching and waiting, but I’d rather be cut open and get another round of fantastic photos of my inner gore than to have to deal with a growth that – suddenly and unpredictably – might show itself to be inoperable. I have no interest in the otherwise inevitable course of zaps and drugs: the prospect of these options actually terrifies me and I have been unbelievably fortunate to avoid the threat of them thus far (touch wood). Surgery, on the other hand, is annoying but safer, and the only thing that scares me about it is that the morphine guarantees intensely unpleasant constipation for an extended period of time. Friends and family need only fear my temporary Roid Rage for a couple of weeks.

See? Confident. Now I just need to notice that summer lazy time is well over and I should actually use my running shoes instead of admiring how they gather dust in the corner. In a few months I’ll have plenty of time to truly vegetate during recovery.
Posted by Frances Kruk at 01:51