Knowing of the Unknowns 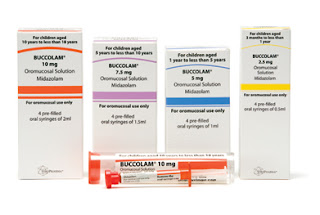 I carry an oral syringe of midazolam in my bag everywhere I go. It's an emergency benzodiazepine, a fast-acting sedative for squirting along the gums and inner cheeks. I have never had to use it thus far (touch wood), but I keep it with me as a psychological and emotional sedative, a personal talisman to ward off the fear of potential postictal violence, should I have a tonic-clonic seizure in a public place. Or even at home: there was a particular episode during which reportedly I was demonic in absolutely every single sense of that word. I had the super strength and the howling and the blather hissing). However, the chances of the drug actually being administered by anyone except my partner are rather slim, and I may never have to shove it in my face at all. It's simply the presence of it by my side that puts me at relative ease. In fact, I suspect it was prescribed chiefly for that purpose, to stop the neurotic, agoraphobic tension and mania I was developing. After all, it's low dosage, intended for epileptic children who have chronic seizures, and its effect on me would most likely be just a bit of euphoria and drowsiness. In other words, probably very nice. A less sympathetic GP would have refused or not even bothered to prescribe such a thing, especially to someone who does not suffer daily or even regular hardcore seizures.

Midazolam, I have discovered, is also used in capital punishment in the United States. It is administered as part of the cocktails of horror injected into the bodies of people who the State has decided are not worthy of life, and its use (or more accurately, malicious misuse) as part of those injections has come into question recently.* It is supposed to sedate, to help take away the pain of the poisons to come, an agent presumably in accord with the constitutional guarantee that such punishment will not cause unnecessary suffering before actual death - not that anybody actually respects the constitution when its decrees are not in their interest. It seems obvious to me that if death by lethal injection is not instant, then for the prisoner it is very possibly a trip that will hardly stay euphoric, a trip into a massive time warp in which one flies through a near-eternity of mental and physical hell as the body is gradually burned from the inside. And obviously, that's the whole point of the punishment, that suffering, because death alone is too easy. While we can't really know the details of the particular suffering that is not visible from an external vantage point, the sadists approving the administration of lethal injections surely know at least a little about how much it hurts and what kinds of internal pains and terrors it unleashes, just as the perpetrators of "intensive interrogation" know how the whirls and whorls of ye olde truth serums can produce a wealth of information. Torture is torture, yeah? Midazolam, like other benzos, is not necessarily going to make a person lose consciousness, but it's gonna throw one into a lucid state where who-knows-what will surface in psychological and physiological experience of the/their world, and at what intensity. Perhaps it even amplifies certain sensations? I don't know, although I've got some idea of it because I take another drug in the same family on a daily basis, just at a very low dosage and in pill form. All drugs do everything at once: they are their own side effects as much as their assumed function. 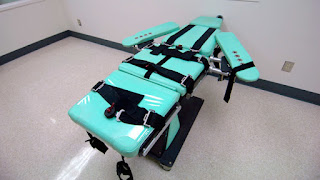 The excruciating pain of Charles Warner, the latest* in a string of State executions of "unexpected", length, those oops-that-took-a-while incidents, began with administration of midazolam as the first drug in the mix. Who knows how long he was still conscious during the State's supposedly most humane form of punitive erasure from this planet. The resulting cluster of media reports immediately caught my attention because of, well, the strangeness of employing the same emergency sedative I carry as the one used in some processes of capital punishment. Strange, I think, because for me the drug's function would be, at its extreme, to save my life, whereas for a prisoner being killed by the State, it's function is........to also save that person's life. Save their life just long enough that they experience maximum anguish. Midazolam is not necessarily a pain killer, it doesn't make one oblivious to everything (i.e., imminent and/or current pain). Even overdosing is uncommon. Maybe there's a "mehhh so what" moment before the paralytic and heart-stoppers are administered, that little bit of euphoria and drowsiness produced by sedatives. But then.....then there's a very lively death for a calculated and "civilised" average (yes, they call it that) of seven to ten minutes or so before the body and brain shut down. Or, oops, eighteen. Or, oops again, forty-three, or ninety, or one-hundred and seventeen. I'm certain there are documents out there that chart the durations of American prisoners' ontological cessations, but obviously positivist methodologies don't take subjective experiences into consideration. Because, for the prisoner undergoing lethal injection, how much longer is the period of dying than even a single minute, whether or not they "show physical signs of distress" to those in the witness gallery? A universe can occur in the space of a minute. And while nobody knows exactly how long it takes to die until they die anyway (and then there's no way to report back), enough knowledge exists about the detrimental effects and affects of the particular drugs being used for the purpose of a painful death. Maybe that's one reason why death by firing squad (presumably the fastest, one would think) is now only somewhat available in Utah and Oklahoma, and even then only under special circumstances.

For those who are interested, here are some super-glam photos of execution chambers, complete with a really hip bit of aesthetic babble. Here the author describes them in terms reminiscent of a vacuous art curator describing an exhibition for an arts grant application, albeit not without some truth:


Those reflections may come in the ghostly, eerie images of America's death chambers, collected from some of the 32 states where the death penalty is still legal. These rooms are empty more often than occupied. Built within prison walls, they are spare and cold and clinical. But what remains carries its own weight — a single gurney, a mirror, a clock hanging alone on a cinder block wall.

The majority of the photographs are highly stylized and come from Lucinda Devlin's The Omega Suites, which depict the architecture of the death penalty. The objects - and spaces - do carry a weight, an antimatter so dense that one can look at them and judge them more easily in terms of framing and colour than by the events in which those objects were involved; the events, for most people, can only be imagined, and only momentarily at that, especially when there are no bodies present. The weight these objects and spaces carry is themselves. They carry the invisible weight of capital punishment's political architecture just by being objects created for that purpose; they carry the weight of being aestheticized objects, and the weight the viewer's imagination projects on them. It's the invisible strings between the politic in the objects and their presence in well-framed photographs that creep me out, for fascism slithers there and not just in the act of capital punishment. And yet the images are essential to look at (as are audio recordings such as these).

So yeah. The hospitals at the core of the correctional facilities, the galleries in which arts happen, the skillfully made objects so fortunately empty of actual flesh in the photos. A making and unmaking of the world, spaces in which life and creation are preserved for the sake of life and creation and preservation - all of which contain and are pain, sickness, horror, nightmare, destruction.....

And yeah. Midazolam. And the grinning face of Hegel.

** And and yeah. Here's a pretty cool article at Mother Jones that I found just now while giving this months-old post a quick glance over before posting. I'm glad I'm not the only one who sees how fucked up the uses of this stuff is. You can't make this shit up. **