Now that I'm just past my third craniotomy and resection of the bubblegum dustbunny, let's revisit the images my surgeon captured for me back in 2008. I have not asked him to snap any more shots since then, for I don't imagine the appearance of my brain has changed dramatically. And yet, my convalescence selfies are also similar every time (staples, blood, scars, etc.,) except they feature an array of colourful new clothing to further spotlight my penchant for vanity. I will therefore continue with those.

The 2016 surgery went smoothly and relatively quickly, and I emerged quite lucid and in control of myself - my thought, my speech, my body and motor control, and my emotions were not affected in the way they were the last two times. I didn't have to go to the ICU and was wheeled straight into my room. I was released from hospital after two nights and part of a restless day, departing with a few bouquets of flowers and a tramadol prescription, morphine no longer possible due to detachment from intravenous drip. Damn.

What was different this time was that I vomited a blackish-green liquid about nine hours after arriving in the room. I'd taken care to not drink water for most of the day, and I'd only crunched, tentatively, a few slivers of ice. The upsurge of liquid was unexpected and totally unwarranted, although in hindsight I consider it to have been a blessing of sorts: that anaesthetic. It's got to get out. It's the worst part of it all, I swear.
Another thing that was different was that there were markings on my forehead (and a few on the side of my temple) that were leftover from the surgery. Four dots from a surgical pen that are used to mark the spot for, presumably, part of an apparatus that holds my skull in place during the drilling and removal of existing clips and the lifting off of the existing bone flap - plus the use of lasers or whatever mysterious means of targeting beams into my head to construct 3D images to consult while they simultaneously pick around with little tools in my brain. Behold. The four dots (and three on the side, but they rubbed off quickly, so whatevs): 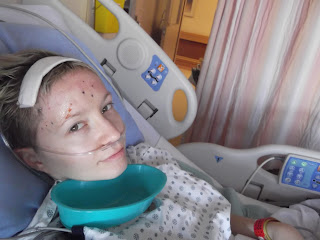 I must report with great honour, that my partner in crime very recently had these four dots tattooed on his fuck-you finger, a valiant act of true magic so that the remaining bits of tumour (yep - there are always some leftovers) know they are despised and not welcome. Radiation and chemicals will be employed to sizzle those bits out. But having the fuck-you finger pointed at it will be the ultimate tool in terroring it out of my skull.

And finally, while the pathology of the tumour is exactly the same as it has been since I was first diagnosed, the WHO has changed its naming system. I will miss calling my tumour a Grade II oligoastrocytoma. I am apparently now the host of a Grade III anaplastic astrocytoma. The shift in naming is significant, not because it has gone "up" a grade, but because it demonstrates how much knowledge has been gained in the last eight years: an unpredictable tumour with a few cells showing anaplastic tendencies has turned out to be more unpredictable and dangerous than previously thought. That is, the kid swimming around in the water with a fake shark fin strapped to his back is, in fact, himself strapped to the back of a real shark. Meta meta meta. We have always known this.