Now that the Harvest Moon has passed and we enter the Holy Season of things that die in order to be reborn in six months' time, I return, finally, with a miniature summary of one part of my aestivation in 2016, my forays during the first couple of chemo cycles that didn't get me too down.

'Twas the summertime traveling with the KrukEd Gypsy, pedaling the gorgeous leather goods she makes by hand. She's my super rad sister who took me along and cared for me during her bidniz adventures at various music festivals nestled in the mountainous regions of Western Canada. Really chill. Unlike my fakefueled over-indulgences while being an employee at the same places last summer, I actually slept most nights this time. Not always intentionally, for often I would go to have a lie down for a couple of hours in the afternoon, planning to go out later, but would ultimately end up sleeping solid for twelve or more hours and waking with the sun, flickering anger, briefly, over my deeply enervated state. Marathon naps. Who sleeps through pounding loud raves in the forest from late afternoon til the morning of the following day? With no ear plugs? Or sedatives? Frances Kruk, 2016. It was difficult to make or keep social plans for the nights. Difficult to make plans in general, in fact. Stoopid Toomour. But know what? I think the bubblegum dustbunny actually did me some good for once, because I was forced to slow down, to float more, to smile and to stress less. Sleep is precious. And sister is good. Sister helps. Proud of us. Is this the key to being an effective Destroyer?

I would wake in the morning and get the coffee going, then float around during the day in the sun with cups of ginger-garlic or spice tea (no sniffles in spite of close proximity to ill people), eyes peering around the vending tent until it was time to curl up again, or to go for a little stroll around the grounds, have some laughs, some sheepish moments, a little bit of humility, all that. I felt how friends new and old are magic and made of galaxies, because they got it, they get it, the need for restful floating. There are good creatures out in the woods, and learning to be chill in the midst of The Crazy is pretty chill in itself.

Look: here's a glowing copse of trees at Bass Coast: 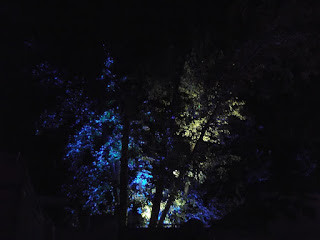 And here's a glowing shot with the bold and beautiful ladies who share the vending space with KrukEd Gypsy, likewise bosses of their own bidnizes and makers of their own products: Dropping Form Designs and Cabrina Channing Silverworks. So glam: 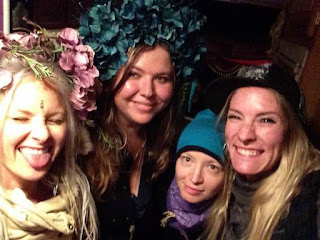 But wait. Who is the one in the toque, bundled up for the cold that is only felt when one is not dancing? That's right. I am cold-blooded most of the time anyway, but I had to be particularly practical on the foggy, damp, part-drizzly, and, well, COLD night that it was. My heart was warm, though. How could it not be.

For let it be known that I have been mocked for this toque. Called a Smurf. Repeatedly. Even though Smurfs wear white hats and it is their skin that is the colour of my toque.

At last year's fests, I learned from the lovely witchy Silverworks lady that having blue skin is an actual medical condition that one can be affected by if they take too much colloidal silver. It is irreversible. Argyria, it's called, from Ancient Greek: ἄργυρος argyros silver. Caused by "inappropriate exposure to chemical compounds of the element silver, or to silver dust." The skin does not turn Smurf-blue, but it certainly has ambitions to achieve that. It is a somewhat greyish blue. It is not......very natural. At all. Turning into a cartoon is not. Natural. And so, I am very keen to disclose, if you hadn't noticed already, that my skin is no shade of blue whatsoever.  I am not a Smurf.

The mockery ends now. You know who you are.

Argyria is also a genus of moth. It is not blue per se. But one might say it does have some tendencies towards greyness, or even...blue-grey. I think we could agree that for the most part it definitely possesses the bright flash of argent, highlighted by uniform coppery streaks across its wings. 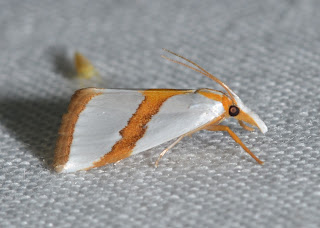 This does not apply much to anything, unless we were to posit that the moth consumes a lot of colloidal silver in the attempt to dull its existing silverness and go through a bluing metamorphosis. To eventually become Smurf-blue. There is no way to prove or disprove that said moth takes silver; additionally, the fact that the moth doesn't really have a mouth is not a factor. He may apply salves topically, for example, or dip his body into tiny tubs of silver dust until his wings creak under the weight of the stuff and he ceases to flash, sinking into the ground, greyer, greyer, grey-blue. And blue? Does he ever turn blue? We do not know what the moth keeps in his medicine cabinet, for he hides it in a secret place that only the other Argyria moths are familiar with, and if he ever achieved true Smurf-blue we'd be hard-pressed to find him in the soil, for he would already be disintegrating. If I were a silver moth I would want to stay silver. If I were who I am I would be who I am.

I should note that the moth in the photo above is an Argyria critica. Most Argyria look more or less like this one. I know very little of taxonomy and nomenclature, but it seems that it might not be unreasonable to take a vulgar etymological stance and consider that there might be something going on with critica, with the critical nature of silver, critical being rooted in crisis, even disease: perhaps the colloidal Smurf metamorphosis, or the sickness of coins. Or the misguided notion that silver is essential in order to, supposedly, survive, despite the fact that money cannot be eaten. Unless you want to turn blue - and fer fuck's sake, there are people who would eagerly let their skin change to blue (or their heads, their hearts, their cloudy little souls) in exchange for glorious financial enormity, but, really? Criticise that silver, crisis it. Suspect the moth, boil the dust with white stones, explode the moon, destroy all snails and other aestivators (excluding me but including my head nemesis), and set human beings free into trees, stars, outrageous lasers and parkades loaded with cats and hot tubs, and only then we might end up ending up. And we would all have beautiful jewellery, all of us. Perhaps handmade and found at festivals.
Posted by Frances Kruk at 07:46