Five or so Days of Loss 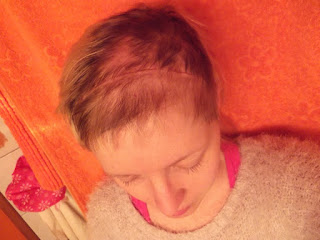 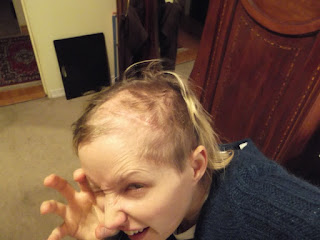 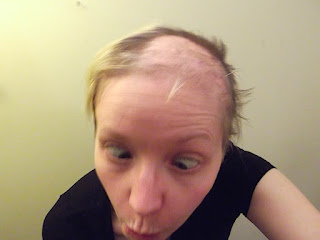 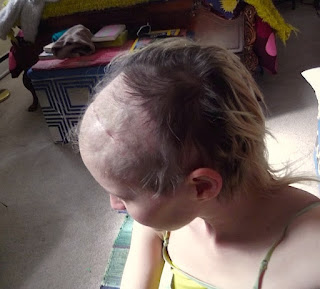 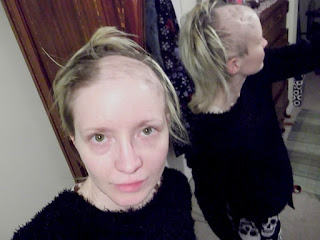 I'm currently at the end of my sixth of seven weeks of radiation therapy. The photos above are from a few weeks ago - I've just been lazy in posting them.

Right on cue (according to the list and timeline of radiation side effects), I woke up one morning after two weeks of treatment with a burning, tender scalp, and hair on my pillow. Over the next few days it just slid out from the whole target area, with nice clean lines marking where the zapping rays were focused. I even began to fill a Ziploc bag with the hair as it departed, thinking it might make a nice souvenir or something, but I soon gave up and pushed the bag away from me in disgust, mostly due to the peeling scalp that was stuck in there with it. There's only so much I can take when it comes to icky things, and icky peeling scalp and dander bleh all clumped up and tangled in loads of hair is one of those things that makes me recoil slightly. Abjection of own body. I do admit freely that I have always had a smelly scalp anyway, and that my hair basically reeks within a day of shampooing it, but I would always try to not think about it and just let other people deal with it when they brush past or reach in for a hug. Shrug. I don't care. Smell my hair. Take a whiff, if you dare. HA.

But no longer, for about two-thirds have disappeared, and I threw away the baggie.

It was startling, actually, to see how easily it came out, and how it thinned. Thinned. I began to feel uneasy when I looked in the mirror and saw the sparse bits of fluff and increasingly long stretches of incredibly velvety smooth slap-head territory. I never thought that I would be so affected by the process of hair loss. All the support literature I had on hand - it all repeats how devastating the situation is for many cancer people, especially for women, and it encourages wigs and cosmetics and provides general tips for maintaining cultural beauty standards by buying stuff ....... But ....... there's something more to it. A fear that is the fear, I imagine, many men tend to have of baldness. I never truly, fully empathized with that fear. I did not understand it. When your hair glides out of burnt follicles and not even stubble is left behind. I didn't expect. So now genuine solidarity. It was no longer a casual or messy or sloppy boring or intentionally silly look in the ways I usually throw together, but one that was out of my control and almost unbearably hideous. Perhaps that's the bigger issue - the complete lack of control, and for better or for worse I do not like lacking control. That's what this is all about at the core, actually. I don't like that there's something inside my skull that is trying to take over the living organism that is me. Easy to say I should think positively and get on with life and happy and chin up when the reality is that life is getting on with me via a death monster that, frankly, while tedious at best, is mostly a motherfucker and has blades at my throat at all times. So in that sense, relinquishing the need for at least some control is not optional.

But back, specifically, to the hair. I have always taken charge of my hair and changed it into either fabulous styles, or into outright disasters that I've pretended were intentional because that's just how I roll. I had no fear of shaving the unaffected parts (and leaving a nice lengthy bit in the back), and I'll happily continue if need be. And once the radiation is done (next week - I can't believe it's nearly finished!), it should grow back, even if mutated. I am fortunate. 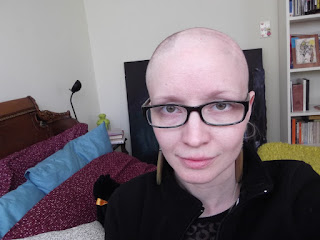